If it weren’t for sharing my blog posts on Twitter, I’m not sure how I would have initially come across Michael Sitarzewski, but I’m almost positive it would have happened eventually. Though he’s only been back in Texas for a little under a year now, he’s been making an impact in the local tech community, and the Dallas community in general.

My post on #WalkDallas caught his interest last Wednesday and he wanted to meet up for a quick lunch at Union Park while he was in the area. I obliged, and since the weather was so nice I decided to walk there. I’d never met him before, but he said he’d be in a green shirt, and sure enough he was on the patio in a green t shirt with his gadgets resting next to him when I walked up.

He welcomed me to sit down and then smiled, “So, you have a story to tell.”

“So it seems,” was my response.

It felt like a juvenile reply, but I really didn’t know what to say at the time. The story is still unfolding and unknown to me. Most of the time I’m just living life and letting saucy tidbits trickle through the strainer in my brain until I can serve it up on a probably over-garnished platter. Bone Appetit!

I was flattered, of course, that my post caught his interest. And while we ate our Wednesday lunch special $4 burgers we quickly came to find that we share some things in common.

Like me, Michael also enjoys exploring the city on foot and snapping pics of his findings. We shared some pictures and he gave me some Dallas development gossip, which I always find interesting.

For instance,  Tech Wildcatters is the business moving into the building at 211 Ervay this summer. And that huge building across from Main Street Garden has finally been bought and is going to be made into condos.

Sitarzewski is very passionate about growing the tech scene in Dallas and foresees big things for the West End in the future. We also talked about the start up scene in Denton and how our friend Kyle Taylor has played a part in that. In fact, his group Bootstrap Denton is having a launch party this June that you should definitely check out.

Michael is a big proponent of the different modes of transportation around Dallas and gets excited thinking about the future of Dallas and how transit might work here in the coming years.

As a big lover of Downtown, Michael took some time to point out his favorite stops in the area including Stupid Good Coffee. We got there by means of the tunnel system and discussed some of the possibilities therein. Neither of us want to see the tunnels closed off, and hopefully there will be potential for business growth there in the future.

When we walked into Stupid Good Coffee the man behind the counter knew Michael as a regular and I introduced myself. While they chatted I admired the unique space that was quaintly adorned with artwork and had windows looking out into the streets of its second story view. It seemed like a good place to get some work done, or catch up with a friend while doing some people watching. Michael ordered a warm drink and I opted for a Brooklyn cream soda. It was delicious! 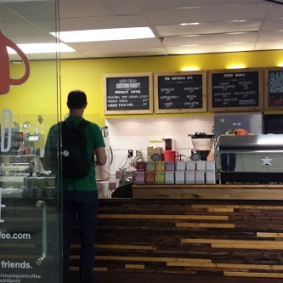 On my way home I thought about how I was glad that Michael had contacted me and how a city needs explorers and connectors. Even though I’m not a programmer or a self-proclaimed tech geek, I appreciate how that part of this city is growing and  how it can effect my interests and work in a positive way. I welcome more meetings like this one, and challenge you to make connections with people of common interests too. You never know what exciting ideas might come from new conversations.

6 thoughts on “Michael Sitarzewski and I Discussed Dallas, Tech, & Coffee”