I had been meaning to see Salim and the Treefort 5 again for a while. I saw them last fall and was really impressed and decided that the next time I had the chance I would definitely go to one of their shows. Well I lucked out last night.

After a busy day of sending out emails and doing some research, I was ready to unwind with a nice drink and take in a show. So I poked around on the Internet looking for music in town and I saw that they would be playing at the Foundry. Score!

The temperature had dropped a bit so I threw on a light sweater and headed over to West Dallas. It was my first trip to the Foundry at night. I had eaten at Chicken Scratch before, but was excited to see what the nightlife had to offer. I was pleasantly surprised to see how packed the place was, though I learned quickly that most people were there to watch the Mavs game…oh yeah, sports.

I queued up to the bar and remained patient while also dancing to the sound of the band in the background. As I recall they were playing their song Hit Parade. I bantered a bit with the bartender who requested my ID saying I look very young, I assured her I’m actually 86 years old. I got a Dallas Blonde on draft, my choice beer of the moment, and went out to the patio to watch the guys play.

I’ll admit that going to bars alone is a new thing for me. I only recently started doing this last month, but it’s worked out well so far. Last night I did feel a bit like the new kid in the high school lunch room though. The Foundry is set up with picnic tables and it seems most of the patrons are in groups. I stood by the wall for a bit and swayed to the groovy sounds, admiring Salim’s choice in vintage brown plaid pants that just seemed to pair so nicely with the band’s ambience. 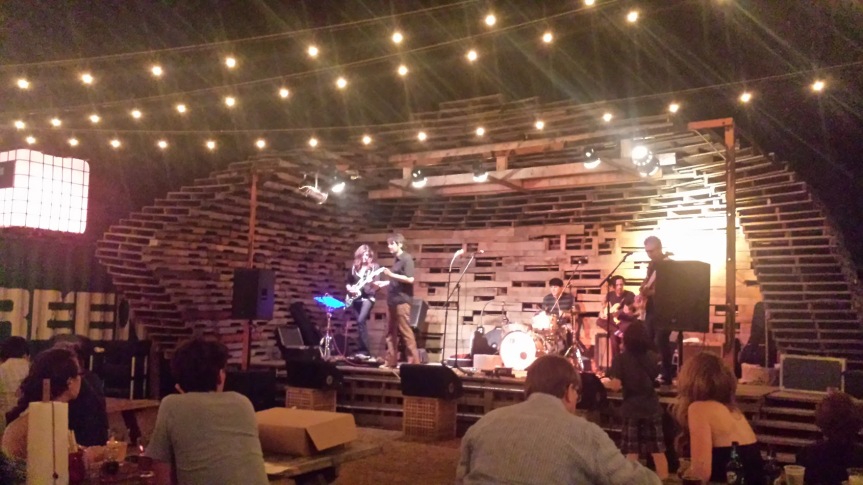 After a song I decided to take a seat at a recently abandoned table. I was soon joined by another solo listener. She seemed pretty familiar with the band and she was really nice to talk with. The band played 1978, which might be my favorite of his songs. Then he announced that there was cake and everyone was welcome to have a piece. Score again!

During the cake break I decided to go and speak with the guitarist Joe Reyes. The last time I saw him play I was completely blown away! He was so friendly and had a genuine smile, though he admitted to being a bit bummed as he was a Spurs fan and they had just lost. He invited me to join him in having a slice of cake, to which I quickly obliged. I wished Salim a happy birthday and practically inhaled the delicious cake. Before I knew it I was back at the picnic table with my new friend listening to the band again.

She pointed out that Salim’s kids were sitting in front of us and that the cake would probably bring on a sugar rush. I laughed, and laughed even more when later during the show a couple of the young boys were pulling out some pretty awesome dance moves.

Another song I remember them playing was Miette, which I’m guessing is the name of his daughter, or some close relative. “Is anyone here named Miette?” – He pointed to this cute, shy little brunette dressed in pink who couldn’t have been more than four years old. It was kind of heartwarming. Even more heartwarming was how the night ended – with the table of friends and family getting up and dancing like crazy to the last song.

It wasn’t long afterward that I closed out my tab and left the Foundry feeling I had ended my long day with a great night.

Disclaimer: I take no responsibility for the lack of quality in these photos. Even though I did take these photos.